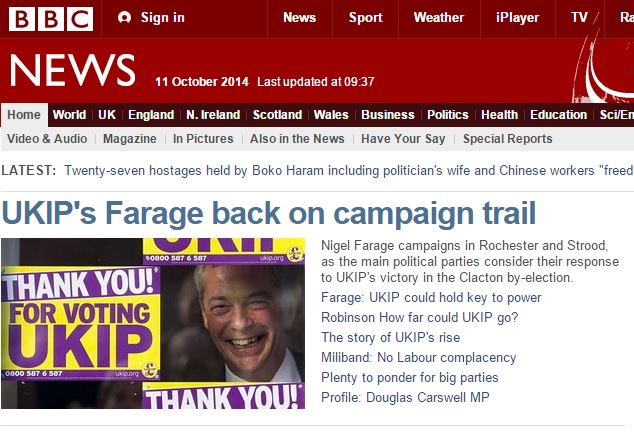 The headline – UKIP’s Farage back on campaign trail – is almost propaganda. Of course Farage is campaigning for the up-coming by-election in Rochester and Strood. But then so are all the other political parties.

The other associated stories develop this uncritical pro-UKIP perspective:

The first gives Farage free rein to say that he could be in government next May. This is preposterous given that UKIP has only one MP. But the claim is made less preposterous by this blanket coverage.

The second, a piece by political editor Nick Robinson, is typically nuanced, but ends essentially confirming the pro-UKIP stance:

“Maybe but maybe the seemingly ever onward rise of Mr Farage will, as he’s long predicted, continue ever onward.”

The third is a long profile of the rise of UKIP, again reiterating how they “defy the odds.” It is complete with the standard and necessary picture of Farage in the boozer. (Message: do you drink beer? Here’s a politician who also drinks beer. See how much you two have in common?!)

To my dismay, they print a picture of the UKIP billboard advert which uses Winston Churchill to push its anti-immigration message. Having read Roy Jenkins’ 900-page biography of Churchill, there is no doubt in my mind that he would have been appalled by the small-minded, insular attitude of UKIP.

The fourth article is Ed Miliband’s response to UKIP. The FOURTH article in this UKIP bonanza, and the first in which the Labour leader – the party which has won three of the last four General Elections, is quoted at any length. Miliband says that a party which wants to cut the taxes of rich people (such as Carswell and Farage) could not genuinely represent the interests of the working class. Which makes sense, and exposes the contradiction of UKIP’s public face and private ideology.

Having let Red Ed and his band of radical left-wingers have their say in the previous article, the BBC leaves any semblance of criticism of UKIP to one side in its fifth story, “By-elections leave biggest parties with plenty to ponder.” Again, the rise of this extremist party is talked of in excitable terms. While UKIP has had “hype, attention and victories of recent years” it has “never had a night like it.”

It goes on to quote the new, and old, Clacton MP, Douglas Carswell: “We must be a party for all Britain and all Britons, first and second generation as much as every other.” This is plainly untrue. No political party can be for all Britons, particularly not UKIP, which is directly offensive to a large proportion of the country.  This minor quibble is not addressed by the BBC.

Let us imagine that in, let’s say, a northern mill town, a militant Islamist party rose up and gained enough popular support to get an MP into Parliament. Would the BBC be talking in upbeat terms about such a party, and quote its leader extensively and uncritically? More likely, it would talk of the troubling rise of Islamism, and would ask Farage, in the pub over a pint of Spitfire, about his concerns.

Finally, there is a glowing profile of Douglas Carswell MP, in which he is described – not in quotes, but as stated fact – as a “free thinker” a “maverick” and a “moderniser.” These adjectives don’t tally even remotely with the reality: an ex-City worker who has dedicated his life to keeping himself in Parliament and immigrants out of the UK.

To add to the cosy image of Mr Carswell, it is noted that he likes swimming, gardening and making quince jelly.

The profile ends with a quote from Carswell’s victory speech: “If we always speak with passion, let it be tempered by compassion.” The reader is not asked whether a politician whose leader does not want people with HIV entering the country could be considered to be compassionate.

This bumper batch of stories from the Beeb would lead any reader without detailed political awareness to make several conclusions:

1. UKIP is a major political force
2. UKIP is a mainstream political party, which does not hold extreme views
3. UKIP has a good chance of being in Government at the next General Election
4. Douglas Carswell is a brave and noble politician, and a family man, standing up for what he believes
5. Immigration is the major issue facing the UK, not housing, jobs or inequality
6. The Green Party, and the Lib Dems, are irrelevant.

There is no doubt that the coverage from some of the national newspapers, and Sky News, has been even more triumphalist. However, the newspapers are explicitly partisan. The BBC, known as being fair and balanced, is at present covering UKIP as if it was the party of government rather than one with a single MP.

We should remember that David Cameron described UKIP members as “fruitcakes, loonies and closet racists.” Michael Heseltine said that UKIP is racist.

If these two right-wing politicians regard UKIP with such horror, why does the BBC give them so much publicity and uncritical commentary? I do not think that the BBC is managed by UKIP supporters. It is, like all news organisations, enamoured by a good narrative, which UKIP provides: the rise of the underdog, triumphing against the odds; the man with charisma who likes a beer; the fight against the existential threat to our cosy, nostalgic way of life.

It is this narrative that gets UKIP its extensive coverage. But if the BBC doesn’t try harder to provide balance, then it won’t be only the Tories or Labour who are under threat. It will be the BBC’s reputation as a trustworthy news organisation.

My Tweets
Join 1,390 other followers